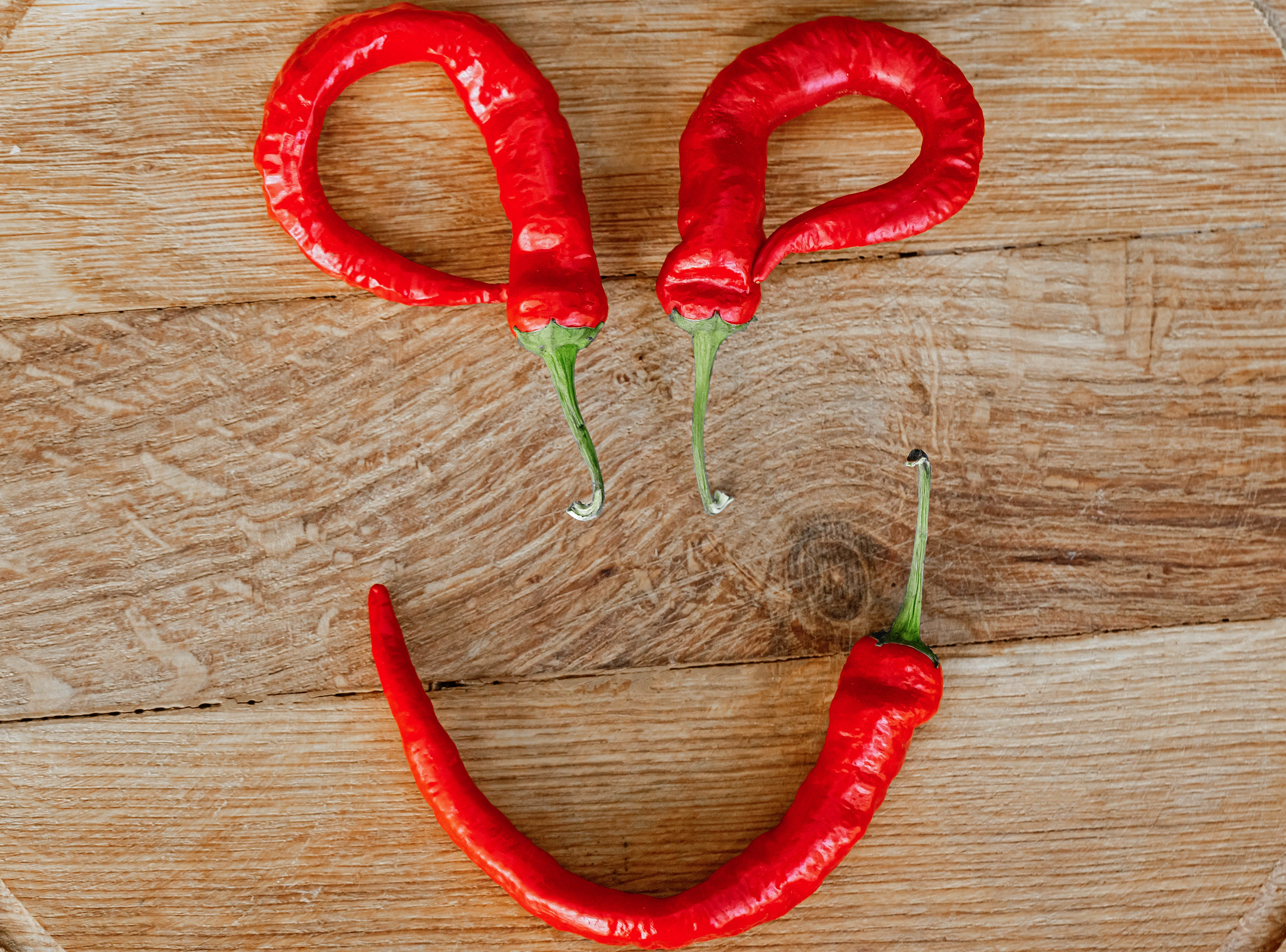 Have you ever eaten in India? Or perhaps tried a fiery serrano salsa in Mexico, the home of the chili pepper? In many regions of the world, cooking is much spicier than here. But what actually constitutes spiciness? And where is the limit of what is tolerable? Will you be able to test yourself with the hottest chili pepper in the world? Let’s take a closer look at the phenomenon of spiciness.

Hotness – what is it actually?

First of all, we must be clear that “hot” is not a flavor. The taste receptors on the tongue can distinguish five qualities. The classics sweet, sour, salty, and bitter need no further explanation, but “umami” is also virtually on everyone’s lips as a flavor.

Briefly explained: The term “umami” was introduced in 1909 by the Japanese chemist Kikunae Ikeda. “Umami” means nothing other than “savory, spicy.” The professor discovered that certain taste cells react strongly to salts of glutamic acid. These are contained, for example, in Parmesan cheese, anchovies, or in soy sauce.

But back to our spicy topic: What exactly happens when we consume spicy peppers, chili, pepper, or horseradish? Quite simply, it is not our taste buds that are addressed in the mouth, but the heat and pain receptors that are stimulated. The spicier a substance is, the more violently the stimulus of a burn is signaled to our brain. Incidentally, in English, the vocabulary “hot” stands for both “hot” and “spicy”. It fits! And if a strong chili dish suddenly makes you feel like you could breathe fire, this impression is no coincidence either.

On the other hand, every good cook knows that finely dosed spiciness intensifies the taste experience when eating. The reason: spiciness promotes blood flow to the mucous membranes – our taste buds react with corresponding sensitivity.

Scoville and the fire of the bell pepper plant

The phenomenon of spiciness has fascinated people for thousands of years. In 1912, pharmacologist Wilbur Lincoln Scoville was the first to attempt to systematize the degree of pungency. The American conducted research with capsicum plants, which include the chili pepper. His procedure was as simple as it was imprecise: according to the principle of “dilute” and “taste,” he served his test eaters solutions containing chili. The more the samples had to be diluted in order to no longer be perceived as spicy, the more fiery their base was in reverse.

Although the measuring technique for determining spiciness has long since changed, the concentration of the active ingredient capsaicin and the Scoville scale named after the US researcher are still relevant. On this scale, commercially available sweet peppers rank at 0 – they are not perceived as hot. At the other end of the scale is pure capsaicin with a Scoville level of up to 16 million.

The limits of what is tolerable

Now the exciting thing about spiciness is that our perception of pain is very individual. Some people are already contorting their faces when the fun is just beginning for hard-boiled people. Italian chili peppers are relatively mild, with between 100 and 500 Scoville units. The Poblano chili variety is noticeably more intense, with 1,000 to 1,500 Scoville units.

The famous jalapeños are quite a leap ahead. They belong in every chili con carne and are rated at between 2,500 and 8,000 Scoville. It’s a similar story with Tabasco: Even though the chili sauce is already the epitome of spiciness for many, it’s more in the midfield with 2,500 to 5,000 Scoville units. Some sambals are about twice as spicy. The thick, chili-based seasoning sauces originally from Indonesia reach 10,000 units or even more.

Things get extreme at 30,000 Scoville units. Cayenne pepper reaches 30,000 to 50,000 units, while habaneros range from 100,000 to 350,000 Scoville units. They are among the hottest chili peppers in the world. With 577,000 units, the Californian Red Savina Habanero was at the top of the Scoville scale for a long time – it was listed in the Guinness Book of Records until 2006, when it was replaced by the Bhut Jolokia. The chili pepper from northeastern India has a staggering one million Scoville units. The human palate is no longer able to differentiate spiciness above this threshold.

“Dragon’s Breath” – one of the hottest pod in the world

A competition has literally broken out at the top of the pungency scale. In 2012, the so-called Trinidad Moruga Scorpion was crowned the hottest chili before breeders from South Carolina presented the Carolina Reaper. The stunning readings vary somewhere around the Scoville to 2.2 million.

Reportedly, in May 2017, a plant specialist from Wales upped the ante: Mike Smith imaginatively calls his accidental creation “Dragon’s Breath”. It is said to bring the “Dragon’s Breath” pepper to over 2.4 million Scoville.

But no matter what the world’s hottest chili pepper is called, if you want to tone down the burn on your tongue, don’t reach for a glass of water. Water spreads the spiciness around the mouth, but it doesn’t ease the pain. Milk and yogurt help, but even more effective is untoasted toast spread with mascarpone. So if you want to spontaneously start a test series now: don’t forget the creamy antidote.