Top Mountain Bike Brands in the US 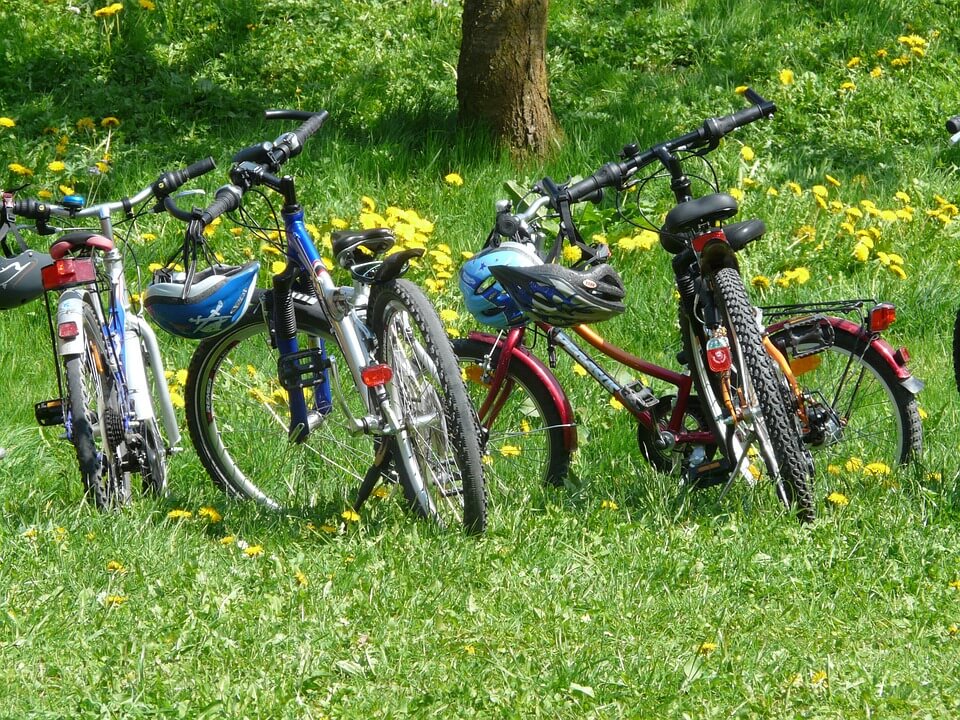 In 1978 Joe Breeze, a bicycle designer and frame builder from California, produced the first-ever mountain bike. Since then, the number of mountain biking enthusiasts has grown dramatically and is still growing. In 1996, mountain biking became an Olympic sport. And why shouldn’t it? Off-road cycling, hill riding, riding on rough and steep lands has only been made possible because of mountain bikes.

We know that you are eager to get your hands on a shiny new mountain bike as soon as you can, and then set out for a journey to infinity and beyond. We recommend you to use this mountain bike brands list to select a reliable bike for your adventure.

What is the Best Mountain Bike Brands in the US

It would have been a bit easy if one had to choose from a single type of mountain bike. But there are four basic types of mountain bikes: Downhill, Enduro, Trail, and Cross-Country. These bikes have different rear suspensions, handling, tires, prices, and varying carbon fibers.

Also, the mountain bike industry has expanded and flourished during the last couple of decades. Today, there are dozens of mountain biking brands out there, providing you with many options, and at the same time, making it challenging to find a trusted brand.

To save you from the hassle and help you quickly find an excellent mountain bike that meets your needs, we have created a list of top 10 mountain bikes in the US. We came up with this rundown of the best mountain bike brands after thoroughly assessing most bike brands’ features, suspension quality, manufacturing, and size.

The very first on our list is the best mountain bike brand in the US. Founded by our very own cycling enthusiast Mike Sinyard, this mountain bike needs no introduction. The London Ambulance’s cycle response unit uses this bike brand to provide service in the most congested areas of the city.

The company produces a large variety of mountain bikes, such as Pitch, Enduro, Turbo, Epic, Rockhopper, and Stumpjumper. Their best-selling mountain bike is Pitch. They have also abandoned the cliché sizing system (small, medium, large) and moved to a new sizing system (S2, S3, S4, S5).

With these bikes, you shouldn’t worry about being dehydrated or carrying a large bag with you because Specialized has introduced SWAT technology, which allows you to store large amounts of tubes, water, and tools, etc.

When it comes to features, all of Specialized’s bikes are lightweight, aero, and well-equipped with tubeless carbon wheels, AXS 12-speed, seamless motor integration, and aluminum frame. The carbon fork, which is also a feature in some bikes, is sure to make your ride even more comfortable.

Trek Bikes are known for producing technologically advanced bikes. The company sells its products in more than 90 countries worldwide. Trek’s popularity for road cycling skyrocketed after US professional cyclist Lance Armstrong used it during the Tour de France.

Their products mostly come in a series, such as their most popular Marlin series, Domane series, Supercaliber series, Roscoe series, Fuel series, and more. The main reason why biking enthusiasts appreciate Trek is because of its lifetime warranty on carbon frames. Trek also allows you to customize your bike in any design that you may want.

Trek Fuel EX is the most popular of the company’s productions. This suspension bike is the best when it comes to riding on rough and technical terrain. Moreover, they are supported by 140mm front suspension and 130mm rear suspension. Trek always adds supplementary features to each bike. For example, they created carbon armor, which slows down and distributes the land’s impact on the frame, making you more confident and comfortable than before.

Yeti is the one brand that was already there when talks about mountain race bikes gained momentum. Having been founded in Colorado, it is also one of the few pioneers of road-racing. Used by renowned cyclists in the world, including Richie Rude, John Tomac, Jared Graves, Yeti is a high-performance, high-quality, luxury mountain bike brand.

The company hasn’t launched many bikes, but the few bikes it has produced are enough to give a tough time to the likes of Specialized and Trek. The Yeti models launched till now are SB 115, SB 130, SB 140, SB 150, and SB 165.

One prominent feature that distinguishes Yeti from its competitors is its Switch Infinity. This technology controls the rear wheel axle path as it travels, which helps a lot during climbing. Besides, Yeti provides a lifetime warranty on its bikes’ frames and the Switch Infinity links. Almost all of its bikes are equipped with a wheel size of 29 inches and a rear suspension ranging from 115mm to 165mm.

GT is another beloved brand of mountain biking fanatics. Its color, premium quality, power, overall design, and simplicity make it one of the best mountain bikes out there. It also has the longest-running history of producing BMX bikes. Founded in 1972 by Gary Turner, who is also the inventor of BMX bikes, GT is the most respected mountain bike brand in the US.

They produce hardtail bikes like Trail HT and Rec HT, which are good for beginners as they are versatile bikes, suitable for smooth terrains. Equipped with an aluminum triple triangle frame, a more comfortable floating seat, and a rear suspension of 160mm, hardtail bikes are in a league of its own.

The company also produces mountain full-suspension bikes like Fury and Force. Their features include a double lock-on grip, tubeless rim, Fury carbon frame, wheel size of 29 inches, and rear and front brakes of 203mm. GT bikes are most famous for their triple triangle design in which the seat remains parallel to the frame.

Started as a carbon fiber frames designer, Cannondale has now become one of the top mountain bike brands, thanks to its uncanny approach towards design and carbon frames. It has also created a name for itself as an innovator in the bicycle market.

Cannondale is best known for the manufacturing of electric mountain bikes and trail bikes – renowned for their smooth ride and speed. The company created a suspension fork called Lefty, which uses 89 needle bearings to remove the static friction encountered by a mountain biker, and ensures fast and smooth travel.

Having lost some of its past innovation-centricity, Cannondale still managed to introduce some high-tech mountain bike models like Habit, Cujo, and Jekyll – all of which are equipped with the latest technologies, such as 130mm aluminum frame, RL fork, a stage 3 saddle, and a 130mm rear shock.

Not as big enough as its competitors, Kona has managed to mass-produce bikes of all qualities since its inception in 1988. With the use of its own Kona carbon, aluminum, and titanium, the company’s bikes have made it to more than 60 countries worldwide, including the US.

Kona is probably most famous for its “freeride” bikes, which are known for their ability to handle the downhill terrain. They are also the most durable mountain bikes out there. Their components are all made in Taiwan.

Kona’s focus has lately shifted towards its latest products Honzo and Process. These models are manufactured with a 120mm RC fork, both aluminum and carbon frames, and front and rear brakes of up to 200mm. Ranging from extra small to XL, Kona’s bikes are available in all sizes and colors.

Diamondback has a charm that has captivated the attention of mountain bikers for 43 years now. The company started by creating BMX bikes and then moved to manufacture mid-quality mountain bikes.

Over the past few years, they have also created high-end models, such as hybrid bikes, full-suspension bikes, and hardtail mountain bikes. Diamondback’s most critically acclaimed model is the Haanjo series, which does well both as a hardtail and a road bike. Its features include mechanical disc brakes, aluminum frame, bike chain of 9 speed, tire size of 700×38c, and more.

Durable construction and affordable price are the two key factors that distinguish Diamondback from other mountain bike companies. For beginners, Diamondback uses Shimano elements, which are known for their ever-lasting durability. For high-end bikes, they use SRAM elements and carbon monocoque endurance frames.

Ibis specializes in manufacturing mountain bikes. The company produces no other product, not even bicycles. With only seven bikes in their arsenal, Ibis has grown to be one of the best quality mountain bike brands in the US.

Their 5th generation Mojo model has taken the world by storm. Built with a carbon fiber monocoque frame, ISCG 05 mount, 153mm rear, and 170mm front travel, it is one the few mountain bikes you can’t resist riding.

This company’s mountain bikes are very diverse when it comes to color. It offers bikes in unusual colors like fireball, coal, bone white, teal, charcoal, and more. Their partnership with the suspension master Dave Weagle has earned them fame for an unmatched suspension known as the DW link. The good news is that individuals of any height can comfortably ride an Ibis mountain bike, thanks to their innovative bike construction technologies.

When Jim Felt founded Felt Bicycles in 1994, he had only one thing in his mind: to create mountain bikes that can beat all others in the niche when it comes to speed. And 29 years down the line, he continues to honor his words. Initially, Felt used to produce speed-oriented bikes for the triathlon, and Tour de France. And in 2011, the company started mass-producing mountain bikes for every mountain biking lover.

The most famous creations of Felt range from Edicit to Doctrine and Redemption to DD. As their motto is speed, they have integrated their mountain bikes with 100mm fast suspension, SRAM 12-speed, Shimanto hydraulics, and front and rear suspension of 180mm and 160mm.

Two of the fascinating features of Felt’s bikes include the Bayonet Fork, which increases the air efficiency, and the Equilink suspension, which adds more performance to the pedaling.

We cannot think to complete our list without the most intriguing brand out there, Evil Bikes. Originated from Northwest, which is famous for its deadly steep terrain, it is no wonder that Evil Bikes’ models are downhill-focused.

They have a total of six mountain bikes. From among these, models Following, Wrecking, and Offering are considered the best ones. These models are supported with 29-inch wheels, which help to easily roll you off from any kind of dirt or rocks and enjoy a longer travel every time.

Evil is like that boy in the class who doesn’t like to follow the rules and wants to do things differently. By equipping the Following with a 120mm carbon frame, 29er, tubeless sealant, 20mm brake adapter, the front and rear rotor of 200mm, and 180mm, Evil has created the best mountain bike of the decade.

The company is also known for producing only carbon bikes, which are the strongest when it comes to durability and stiffness. Moreover, Evil, like others, also provides a lifetime warranty on frames and other parts.

Almost all of these mountain bike brands offer demo-drive for a day or two at a reasonable price. It is a good idea to take some of these bikes on test drives to determine if they suit your needs, requirements, and interests.

When looking for a mountain bike, beware of the shine and the heavy components, because these are possible signs of a low-quality product. Also, choose a tire size according to your height. For a 29-inch wheel, you should be taller than 167cm (5’5 feet). Mountain bike riding is a dangerous sport that can lead to several injuries with a mere minute of inattentive. So, if you are a beginner, it would be wise to buy an entry-level bike, practice on smooth trails, and learn mountain biking under the supervision of a mentor. With these tips and tricks up your hand and the list of top mountain bike brands, you are sure to have the best adventure of your life.