Top Guitar Brands in the US 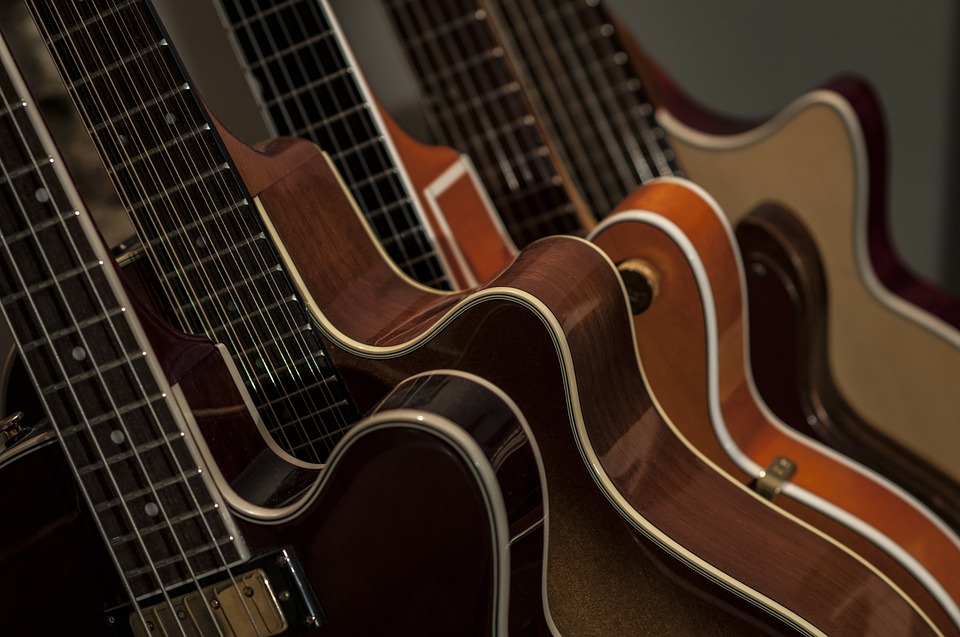 Now that we have discussed the basics let’s move on and talk about the top 10 go-to guitar brands in the US. While our selections are subjective, they are backed by popular opinion. We did the research, spoke with guitar enthusiasts, read reviews, and even tried a few of these ourselves to come up with this rundown of the best guitar brands in the United States, including the best acoustic guitar brands and the best electric guitar brands. You can use this list post as a guide to choose a good guitar brand.

Taylor is an American based company started by Bob Taylor and Kurt Listug in the 1970s. Taylor was the guitar maker while Listug handled the business. Together, they created a company that nearly 50 years on is one of the US’s best-selling guitar brands. Taylor guitars are known for their unique combination of fine craftsmanship and the use of exotic tonewoods. They were one of the first companies to use Oakwood in acoustic dreadnoughts and definitely the ones that popularized it.

Today their offerings include the 500 series made of Cedar and Mahogany, the 600 series made of Maple and Koa series featuring authentic Hawaiian koa wood. But that’s not all. With mid-range options like the 200 series and affordably priced 100 series, Taylor has something for everyone. While they are not the cheapest brand, they certainly aren’t the most expensive either. For the building quality and durability that they offer, you get your money’s worth value.

Remember the dreadnoughts we mentioned earlier? These are the guys you go to if you want one. Guild has been around since the early 1950s when they focused on making jazz guitars. But they soon turned their attention to other guitars and struck gold with acoustic dreadnoughts. Today the Guild Guitar Company is a subsidiary of the Cordoba Music group with a rich history of artists who have chosen it at some point in their careers.

They sell an astounding 30 different types of dreadnoughts. And why not? As well as they make them, I’m convicted they could do 30 more just as well. The best part is that none of these beauties, with their excellent builds and tones, will cost you a fortune. If dreadnoughts aren’t your cup of tea, basic acoustics, jumbo-fretted guitars, and orchestra guitars are also on the menu.

Let’s go across the border and talk about the Canadian manufacturer Seagull. Despite being a youngster in the industry (founded in 1982 by Robert Godin), this company has established itself as one of the world’s most prominent acoustic guitar brands. While their premium builds are noteworthy, Seagull made its name on the back of several game-changing innovations, such as the use of special headstock placement that improves the instrument’s tuning stability.

Seagull sells a wide array of instruments such as the ukulele, mandolins, guitars, and ‘M4s’ that are hybrids of all of them. They offer 9 different body shapes and sizes and various models such as Artists series, Performer’s Flame Maple series, Entourage, and many more. Their flagship model is a beauty called the S6.

C.F. Martin and Company, aka ‘Martin,’ is the stuff of legend in the acoustic guitar space. Founded in 1833 by Christian Fredrick Marin, the company is still going strong and closing in on two centuries in the industry. Martin is famous for models like the 42SC John Mayet, D-42 Custom, and D-41K Purple Martin that collectors willingly spend ten grand on to add to their collections. Their vintage models have even sold for 100,000 at auction!

Martin catalog today includes the 15, 16, and 17 series along with Road series for professionals. There are also beginner and intermediate options in the form of the X Series, Little Martins, and Junior Martins. If you want something truly special, you can choose to visit their custom shop and spec out your personalized guitar from scratch.

The Ovation Guitar Company, based in Connecticut, has a remarkable backstory. Ovation was founded in 1965 by an aerodynamicist named Charles Kaman, who had formerly dabbled in a range of business from chemical testing and nuclear weapons to helicopters and entertainment. Oddly enough, this gave Kaman a unique perspective on materials and how to forge them into the best possible guitars. He put together a team loaded with Aerospace Engineers and woodworkers to develop the first Ovation guitar. The rest, as they say, is history.

Ovation now sells 6 and 12-stringed guitars, double necks, bass, lefty, and many other premium guitars. But it’s their custom models where most people should focus their attention. Among their best offerings are the American LX series, Main Stage Balldeers, Exotic Tonewood models, and their Timeless Collection.

Let’s start our discussion of electric guitar brands with Yamaha. Yamaha started as a small piano manufacturer in Japan over 130 years ago. Today it is a giant multinational corporation that has its hands in a variety of businesses. It makes this list not because it’s objectively one of the best brands on the market, but because it is the go-to brand for beginners.

Yamaha manufactures excellent beginner guitars, acoustic and electrics alike. The SG2000 from their SG series is perhaps their best electric guitar though the RGX and RGZ aren’t that far off. Yamaha guitars owe their affordability to mass production, which has often gotten them a bad rap. Rest assured that none of the guitars from their gargantuan catalog lack in quality or playability.

Squier’s came into being following the drop of Fender’s Lead series in the early 1980s. To this day, Squier is owned by Fender and considered the little brother to the brand. But Squiers are much more than a poor man’s Fender. They make excellent guitars such as the Bullet, Artist Models, Affinity Series, and the Contemporary. The Classic Vibe series caps their lineup with vintage models such as the 70s Strat.

Fenders don’t come cheap, and I certainly don’t expect many to start their journey with one. On the other hand, squiers are a brand I can safely recommend to anyone starting an electric guitar journey. The models offer negligible downgrades to Fenders to all but the most discerning pros. Excellent designs, aesthetics, and quality to boot-that too without having to break the bank? Sign me up!

Within 35 years of its inception, PRS has consolidated its position among the electric guitar elites like the Fenders and Yamahas of the world. PRS are hardware specialists and innovators of pickup technology. PRSs are perfect for intermediate level players because they make it easy to use the selector switch to alter sounds in a heartbeat. And if you thought that was it, their use of mahogany, maple, and ebony for the builds is also something to write home about.

There are good electric guitar brands, and then there is Gibson- the undisputed king of the jungle. It was started in 1902 by Orville Gibson, and after a forgettable first few years, it started to take off as a brand in the 50s. And How! They are now one of the largest guitar brands in the world known for making the quintessential rock guitars.

But don’t take my word for it. Just know that the likes of Ace Frehley (KISS), Slash (Guns n’ Roses), and Angus Young (AC/DC) use Gibsons. Some of the most popular Gibson guitars are Les Paul Goldtop, the L-5 CES, the Explorer, the Bryland, and the aptly named Flying V. Gibson has a legacy to behold, and any price you pay to be a part of it is worth it in my eyes.

In terms of cultural impact, no other brand on this list comes close to Fender. Its founder Leo Fender created the lap steel guitar in 1944 and literally changed the dynamic of playing guitars and essentially gave birth to totally new music genres. And the company hasn’t looked back since. It currently manufactures some of the highest-rated guitars on the market, such as the Jazzmaster, Stratocaster, Mustang, and Telecaster. Sitting proudly at the top of their line is the Jaguar.

Fender is a big brand that sells a wide variety of guitars and accessories, such as effect pedals. It also happens to own some other big players in the space such as Gretsch, Jackson, Bigsby, Squier (Discussed above), and Charvel. Fenders, to this day, remain pro players’ favorites across a range of genres.

And there’s that! Our list of the best guitar brands in the US to help you pick the best brand out there. If you have stuck with us so far, we will leave you with a small word of advice. We understand that buying a new guitar is a daunting proposition made worse because many of these companies have die-hard fans that swear by their choice over all others. But remember, while your choice does matter, your commitment to the craft is far more valuable than the means through which you express it. Practice regularly and focus on consistent improvement. And with that, we wish you good luck and bid you farewell.