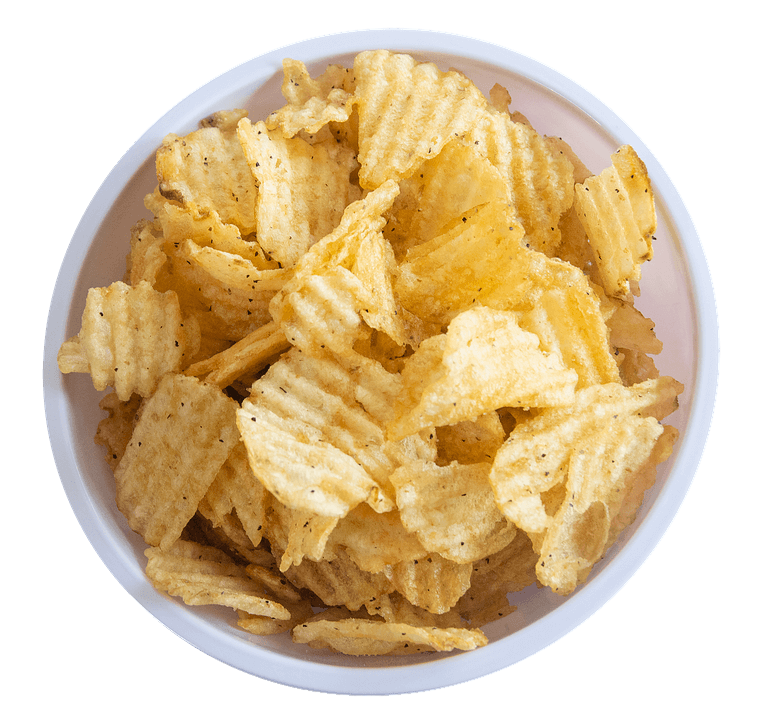 Whether it’s movie time, a gaming session, a friendly get-together, or a snacks time, all are incomplete without those crispy and crunchy thin fried potato slices, the potato chips. The spices and flavor clubbed together with the crispiness make potato chips one of the favorite appetizers throughout the world.

The legendary invention of the recipe of crispy, salty, thinly sliced potatoes dates back to 1853. The chef George Crum worked in a fashionable restaurant in Saratoga Springs, New York. He tried to meet customers’ repeated complaints about his French fries not being thin enough. Well, the chef ultimately got too irritated to fry thin slices of potato, which led to the birth of potato chips. Today, we enjoy chips sitting anywhere and not in restaurants only, with numerous brands offering scrumptious recipes of potato chips.

In 2013, Corkers Crisps, a potato chips manufacturer made an entry in the Guinness World Records by making the largest potato chips bag, 18 feet tall with 2,515 chips. Well, after such interesting facts, let’s find out about the leading chip brands available today.

With numerous potato chips companies flooding the market, it gets confusing sometimes which one to pick. Well, whether you want a packet of chips for yourself or for a snack party, knowing the top brands of potato chips can always be of great help.

For over 75 years, Lay’s has been a top brand manufacturing potato chips. Lays was founded in the United States, and it is popular in the US under this name, while in many other countries it is sold under different other names like Walkers, Smiths, etc. Lay’s is also often referred to as Frito-Lay. Additionally, Frito-Lay, a wholly-owned subsidiary of PepsiCo, has been selling both Lay’s and Fritos since 1965. In the year 2012, Frito-Lay products captured 59% of the US snack-food market. Lay’s has a huge range of flavors in potato chips like sour cream & onion, classic, salt, pepper, etc. Lay’s Stax, Lays Kettle-cooked, Baked Lays are some popular products from Lay’s.

Kettle Brand has been one of the top potato chips brands in the market and is popular for its exclusive thick-cut, slow-cooked chips. The company has been in the US market for over 40 years. The company’s unique chips processing lays back to the old fashion kettle-cooked method. The Kettle brand is also known for using all-natural ingredients, all real, and exclusive seasoning. And with the kettle-cooked method, it creates crispier and crunchy bites of chips. You can also try the nut butter and tortilla chips as well from Kettle. Some popular flavors from this brand include honey barbecue, sour cream, sea salt, New York cheddar cheese.

Pringles is a well-known US brand of stackable potato-based chips, a variety of common potato chips. Until recently in 2012, the brand was owned by Procter & Gamble (P&G) since 1968 and was popular in America marketed as “Pringles Newfangled Potato Chips”. However, in 2012, the ownership changed to Kellogg’s with a huge market in over 140 countries. The global market share of Pringles was calculated to be 2.2% in 2012, being the fourth most popular chips or snack brands after Lay’s, Doritos, and Cheetos. Check out the most favorite spicy flavors of Pringles like sour cream and onion, salt and vinegar, cheddar cheese, ranch dressing, barbecue, loaded baked potato, or hot and spicy.

Cape Cod Potato Chips surfaced as a popular potato chips brand amongst the tough competition for its kettle-cooked potato chips. With headquarters located in Hyannis, Massachusetts since 1999, Cape Cod Potato Chips is a subsidiary brand under Snyder’s-Lance. Cape Cod chips pour in a crunch, amazing flavor, and unbeatable taste in each of their products. Top products from the brand include waves, waffles, less fat, classic, etc.

Since 1921 UTZ Brand of potato chips have established their sole identity in the US market. Based in Hanover, Pennsylvania, today it manufactures a wide range of products apart from potato chips like pretzels, popcorn, cheese snacks, veggie chips, tortilla chips, and pork rinds. Originally known as UTZ Brands, the brand is popularly called UTZ in the American market. UTZ works with market-leading brands like Warehouse Clubs and Mass Merchandisers as their leading snack supplier nationwide.

Herr’s Foods Inc. is a US brand of potato chips with its headquarters located in Nottingham, Pennsylvania. The company has a broad market base with Eastern United States, Mid-Atlantic Region, and Canada being its primary market. Overall, Herr’s products are sold in all 50 US states and globally in over 40 countries. Apart from potato chips, Herr’s has a huge snacks product line like tortilla chips, popcorn, cheese curls, pretzels, and onion rings. Until 2016, the company has had a huge spectrum of over 37 types of potato chips.

When it comes to exclusive Kettle Cooked Potato Chips, you can’t just resist thinking about the scrumptious bites of Dirty chips. In 2011, the company came under UTZ Quality Foods. Dirty chips are Kosher certified, which means it strictly contains no wheat gluten. The processing is that of kettle-cooked where chips are fried in peanut oil, lending it a delicious taste.

Miss Vickie’s is specifically a Canadian brand of potato chips. However, in America, it is Frito-Lay, which manages the manufacturing of this brand for the US market. The brand has an expanded market in Canada, North America, and Europe. The brand was the brainchild of Miss Vickie who was inspired by her mother’s recipe. She made a few alterations like adding peanut oil to potato chips to make them different from regular potato chips.

It is not only hard to ignore the temptation of the flavorful crunchy and crispy bites of potato chips but impossible to cut them out from your party menus. Whether a birthday party or a quiet day at home, potato chips are a friend, not too healthy if over-consumed but a perfect partner for happiness.